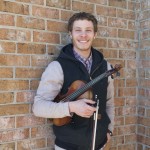 Tommy has been playing the violin since 2000. He studied the Suzuki method under his first instructor. His second instructor, a member of the National Symphony Orchestra, sat 5th chair in first violins. His third and final instructor is the violin professor at James Madison University. Tommy says, “Violin has taken me to places that I couldn’t have even dreamed of.” When he was younger, he had the opportunity of playing in the Youth Symphony Orchestras of Prince William. In the eighth grade, he moved up to the top orchestra. That year, his orchestra, along with three other orchestras across the nation, was invited to play a competition at Carnegie Hall. His orchestra, Youth Symphony Orchestra, won Gold Medal. In high school, Tommy gave multiple performances at the Kennedy Center with the National Symphony Orchestra. He has played at countless weddings and has even performed with the band “Kansas”. After college, he extensively studied music theory and ear training. His method of teaching is classical, but he also teaches the Suzuki method. He is also able to teach bluegrass fiddle. He’s been teaching at Jessica’s Music Studio since 2013 and has been excelling ever since.